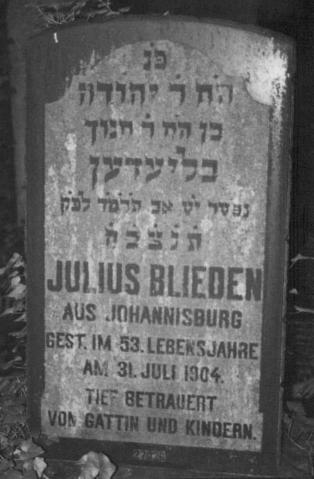 Photograph of the grave of Julius (Yehuda) Blieden (1851-1904), Weissensee Cemetery, Berlin, German. He was the husband of Yochved Blieden (nee Gittelson) and the son of Zundel and Nese Blieden (nee Saganowsky) of Žagarė, Lithuania. He was a grain and produce merchant. His business was J Blieden And Co., Randfontein, district of Krugersdorp. In 1904 he was injured in a cart accident and sustained a severe head injury. He was advised to travel to Berlin, Germany for surgery. He was accompanied by his wife and underwent surgery at the Jewish Hospital. He died in Berlin on the 31st July 1904, aged 52 years and was buried 2 days later on the 2nd August in the Weissensee Cemetery in East Berlin.