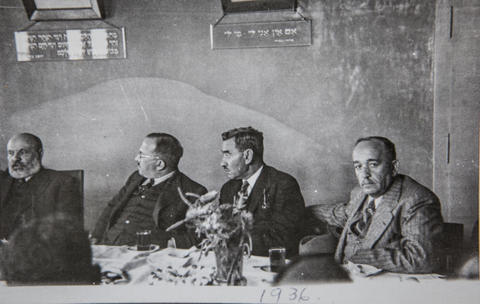 Photograph of the Revisionist Ze'ev Jabotinsky (1880-1940) founder of the youth movement Betar. He is seated 2nd from the left and Max Burland is seated 3rd from the left. Jabotinsky addressed Johannesburg Jewry at an event held at the Plaza Cinema in Rissik Street in 1936. In 1930, while on a visit to Johannesburg, Jabotinsky invited a small group to launch the movement in South Africa. During this visit to South Africa, the British authorities cancelled his return visa to Palestine and he was never able to return to Palestine. (Source: South African Jewish Report 10 May 2019. Jabotinskyites from the roots up).