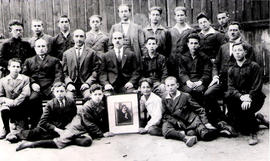 Photograph of the "Mavfitsi" Haskalah school children and teachers. All students and teachers are male, and are aged from early adolescence to manhood.

Haskalah refers to the Jewish Enlightenment, which was an intellectual movement that arose in the late 18th century in central and eastern europe. Those who ascribe to Haskalah are called maskilim, and characteristically intended to integrate Jews into modern society, while simultaneously maintaining and nurturing a Jewish uniqueness. This means that even though some acculturation was encouraged, Haskalah as a movement advocated for preserving the continued existence of Jewish society as a distinct entity and worked towards promoting a spiritual and cultural renewal of Jewish society. [Source: https://yivoencyclopedia.org/article.aspx/Haskalah].

This class was called Sholem Aleichem class, referring to a famous and leading playwright and author who used this as his pen name. Sholem Aleichem wrote stories about 'Tevye the Dairyman' about Jewish life in Eastern Europe, which were later translated into the widely successful musical in 1964, 'Fiddler on the Roof'. This was the first English and largescale commercial production depicting Jewish life in Eastern Europe. The author wrote many short stories and plays, and did a fair amount of lecturing and political activism via representation means while living in America. He advocated strongly for Zionism, the use of Yiddish as a national Jewish language, and was purposeful in all his writing to communicate these ideals. The author in question was born as Solomon Naumovich Rabinovich, but used a slight variation of a common Hebrew and Yiddish greeting - "Shalom Aleichem" - as a pen name. This greeting means "peace to you" or "may peace be upon you". [Source: https://www.yiddishbookcenter.org/language-literature-culture/pakn-treger/why-read-sholem-aleichem]. This author's portrait is being held by two young boys in the centre of the front row of the photograph. A suspected relative of Sholem Aleichem, Mr I. Rabinowitz (alternative spelling of the author's given surname, Rabinovich) is photographed in the back row, third from the left. 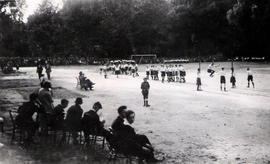 Photograph of students taking part in school athletics. This photograph is taken from the sidelines by a spectator of athletics day, held between various Jewish schools in the area and surrounds. The children are lined up and are doing activities such as high and long jump. This kind of event was necessary to hold among Jewish schools since secular and non-Jewish schools were unlikely to 'mix' with Jewish students, thus meaning the community turned inwards to other Jewish schools for interschool competition and cooperative activities. 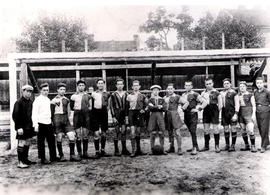 Photograph of the Jewish boys comprising the Olymp Football Club team. The soccer players are in uniform, with outfits emblematic of their club. They are posed in a line, with the centremost player guarding the football between his feet. 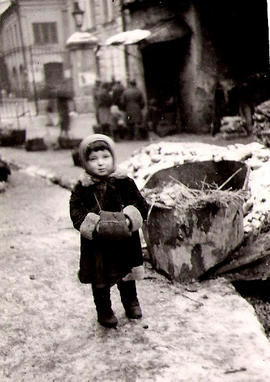 Photograph of Alexander Kreine (alternative spelling: Aleksandr Kreyn), a young child around the age of 5 years old standing on the icy streets of Vilnius. The caption for this photograph notes that this child is named Alexander Kreine, which matches with a famous Jewish composer born around 1882. Since this photograph was taken in 1938, this is not the famous composer, but the similarity in names is interesting nonetheless.

While Vilnius was not formally ghettoized by 1938, only forming in September 1941, the oppressive policies and hardships for Jews in most of Europe and especially in Eastern Europe were apparent and heightened by this point, setting a sombre tone for this photograph. 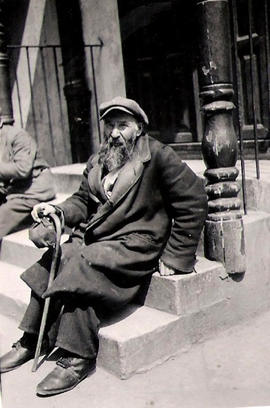 Vilnius Lithuania, "An elderly man sitting on some steps"

Photograph of an elderly man sitting on some steps on the side of the road. These steps lead up to an unidentified building behind the man. The man has a walking stick.

Vilnius Lithuania, "A street in Vilnius"

Photograph of a street in Vilnius, taken from an upstairs window or annex, looking down onto the few people still out on the street. Some houses can be seen further down the cobblestoned street, some of which may be shops. 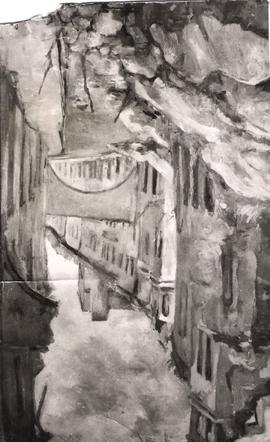 Vilnius Lithuania, "A painting of the reflection of a building in Vilnius"

Photograph of a drawing or painting that seems to depict the reflection of a street with buildings and a pavement as it would appear if mirrored in a puddle. There are cracks in the pavement, and the sky looks dark and ominous. The caption of the photograph says "depth in proportion", perhaps indicating the title of this drawing/painting.