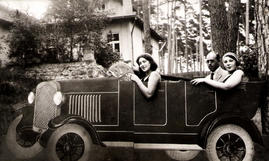 The Jonava Photograph Series includes one photograph of some people seated in a motor vehicle, smiling at the camera. This photograph is taken with a house and some tall trees as the backdrop. The driver of the vehicle, Sonia Berger, is a relative of Mr Berger, who lived in Panevezys. Mr Berger moved to Johannesburg, where he donated this photograph in 1988, among other photographs in this Collection.

The chaotic pattern in Eastern Europe and nearby regions in the first half of the 20th century – mostly as a result of the two World Wars – consisted of sporadic occupation, independence, and reoccupation of territories. Following the same pattern as many shtetlach in Eastern Europe, particularly in Lithuania, Jonava was part of the Russian Empire until the First World War when it was occupied by Bolsheviks. Notably, this town was particularly large, and had a particularly large Jewish population, forming the majority of the residents. In the interwar years, the town was part of the Independent Republic of Lithuania, which was disrupted by Soviet invasion in 1940, and once again by Nazi invasion in 1941 at the start of the Second World War when Soviets and Nazis declared war. Aside from destruction of property and looting of citizens, the Nazi troops worked in tandem with Lithuanian Army units to massacre Jewish residents in two mass murders, one in August and one in September of 1941. [Source: https://kehilalinks.jewishgen.org/Jonava/jonhist.htm].

The town of Jonava is named as such in Lithuanian, as Ianovo in Russian, as Janów in Polish, and as Yanove in Yiddish.