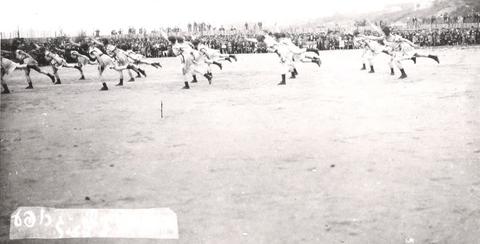 Photograph of some Jewish Athletics/Sports Club members performing calisthenics in Kaunas, taken in 1925. This is a synchronised performance that has a collection of spectators visible in the background. Calisthenics is an exercise approach that was popularized in the early 20th century. It refers to a form of exercise that focuses on building strength and muscle through movements that are often performed rhythmically, and use of one's own bodyweight as an alternative to using equipment. This format of exercise is often done in groups, with a synchronised routine, which is thought to promote group cohesion. [Source: https://www.jstor.org/stable/43609537]. These athletics and sports organisations were often points of social integration between and across Jewish communities in Europe, due to the widespread Antisemitic exclusion of Jews from mainstream sports clubs.