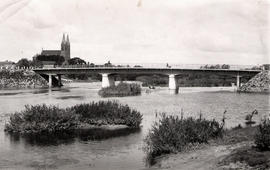 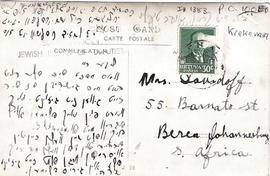 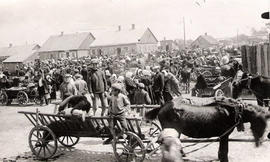 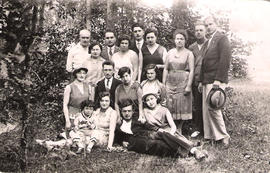 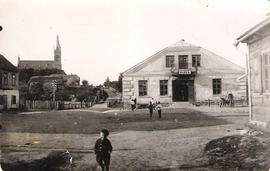 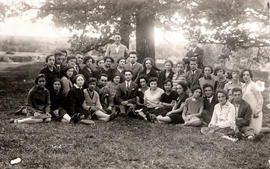 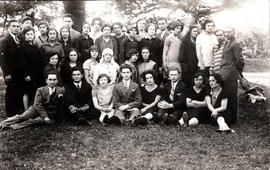 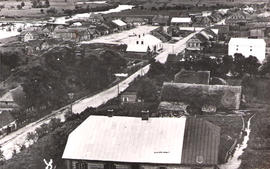 The Krekenava Photograph Series includes photographs of the graphic side of post cards, ranging from landscapes and cityscapes of the town of Krekenava, to group photographs of Jews who lived in Krekenava.

One photograph shows the reverse side adressed to someone in Johannesburg, South Africa and written in Yiddish.

The chaotic pattern in Eastern Europe and nearby regions in the first half of the 20th century – mostly as a result of the two World Wars – consisted of sporadic occupation, independence, and reoccupation of territories. Krekenava was part of the Russian Empire pre-World War I, but early during WWI there was an incident of mass violence where the Russian government expelled all Jews from the shtetl and burnt it to the ground. Even during the brief period of independence in Lithuania between the wars, a small proportion of Jews compared to pre-WW1 returned to Krekenava, where they worked as traders and artisans. Notably, there was a strong Zionist presence in Krekenava, with many Jews advocating for the use of Hebrew and trying to facilitate the passage of Jews to Israel. There was some significant contribution of Jews to the economy in Krekenava between the wars, where Jews were noted to own all 12 of the stores in the shtetl in 1931. This contribution was eliminated by Soviet occupation, where all factories and stores were nationalized. This made Jews vulnerable to the virulent Lithuanian nationalists in the town, and drove many Jews to seek protection from the Soviet occupiers. The Lithuanian guard that had formed were determined to stop this kind of escape, and forced Jews to remain in Krekenava, awaiting German occupation in June 1941, upon which Germans handed control over to Lithuanians to govern under German supervision. This was a violent period of massacre for Jews. [Source: https://www.jewishgen.org/yizkor/pinkas_lita/lit_00621.html].
The town of Krekenava is named as such in Lithuanian, as Krakinovo in Russian, as Krakinów in Polish, and as Krakinove in Yiddish.