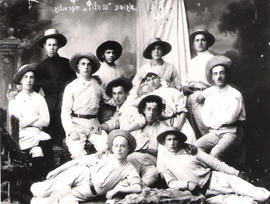 The Kremenchuk Photograph Series includes a photograph of some Jewish members of the Hechalutz organisation. The Hechalutz Zionist organisation aimed to train and prepare youth and young adults to survive and self-sustain in Israel, through practical training in agricultural work and ideological teaching of the Zionism. Due to the harsh political and economic situation in Israel, it was necessary to have these skills. This immigration to Israel is in light of the Zionist sentiment of aliyah (returning to the Jewish homeland). The members of this organisation competed to become Halutzim, which is a Hebrew word that translates directly to “pioneers”. This originally referred to the first Jewish people who immigrated to agricultural Palestine from the 1880s until the State of Israel was formed in 1948, but was increasingly used in the 20th century to refer to those who migrate to Israel. In other words, members of this organisation were intending to immigrate to Israel, but were competing due to the limited number of travel passes for this kind of emigration at the same. [Source: https://www.yadvashem.org/about.html].

Notably, Kremenchuk is situated in the country of Ukraine, thus standing apart in this Lithuanian Towns Collection. However, Ukraine does share the similar status with Lithuania of being an Eastern European country. Present-day Kremenchuk is mainly an industrial town, and is built along both banks of the Dnieper River.

The chaotic pattern in Eastern Europe and nearby regions in the first half of the 20th century – mostly as a result of the two World Wars – consisted of sporadic occupation, independence, and reoccupation of territories. As part of these occurrences, Kremenchuk has changed hands a few times, before settling as part of independent Ukraine. At the start of the 20th century, including the date of the photograph in this Series, Kremenchuk was at the mercy of the Russian Empire, with centuries of anti-Semitism in the town and surrounds forerunning similar oppressive experiences under the Tsar.

However, the most tumultuous period of interest regarding power shifts in Kremenchuk that impacted the lives of Jewish people is that between the start of the First World War (WWI; 1914-1918) and the Second World War (WWII; 1939-1945). The Russian February Revolution of 1917 is the first point of contested rule in Kremenchuk during this period. Bolsheviks and Mensheviks are an important set of terms to differentiate when navigating the Soviet political landscape at this time, which incorporates the Russian Revolution. While both groups advocated for communism, the Bolsheviks, also known as the Red Army, were far more radical and elitist in their policies and governance. This is in contrast to the Mensheviks, known as the White Army, who fought with a less radical approach to communism, with more room for amenable power structures. During the 1917 February Russian Revolution, a Soviet council of workers took control of the city, with the leader of this council becoming a champion for communism in Ukraine. This informal control was only formalized on the 26th of January 1918 with Bolshevik occupation following the Ukrainian-Soviet War. Shortly after, in February 1918, Bolshevik troops were forced to withdraw as part of the Brest-Litovsk Treaty, which acknowledged Ukrainian independence. Besides this treaty, the Red Army withdrew as a result of the rapidly approaching German and Ukrainian armies.

In a series of hostile events post-WWI between Bolshevik Russia and Ukraine, the Bolsheviks took back control of Kremenchuk on the 1st of February 1919. Not long after, a Ukrainian warlord nicknamed Otaman Grigoriev, switched from previously supporting Bolshevism to leading an insurgency in favour of Menshevism. This lead to Menshevik occupation of Kremenchuk from July to December 1919. Following their withdrawal, an uprising in a nearby town lead to the elevation of Kremenchuk to the administrative centre of a peasant-run government from 1920-1922. During the 1930s, Kremenchuk became involved in railcar and road equipment manufacturing, as opposed to the previous industries of railcar repair and agrarian equipment production.

During WWII, Kremenchuk was severely oppressed under Nazi occupation which lasted from 15 September 1941 to 29 September 1943. Nazi rule involved almost complete eradication of the city and its buildings, which forced Kremenchuk to rebuild post-WWII, explaining its distinctive architectural style comapred to the rest of Ukraine. After being liberated by the Red Army, Kremenchuk existed as part of the Soviet Union until 1991, when Ukraine declared independence.

An unfortunate and notable qualification to make is that Jewish people living in Kremenchuk were never truly peacefully settled or welcomed. This was due to ongoing anti-Semitism, which only worsened under each occupying power, with acknowledgement of the most dehumanizing and deadly experience being that under Nazi occupation. This occupation was run by Einsatzgruppen, who instigated mass shooting of Jewish folk, with the abundant assistance of local Nazi-supporters.
The town of Kremenchuk is named as such in Ukranian, as Kremenchug in Russian, as Kremeńczug in Polish, and as Krementchug in Yiddish.
[Source: https://www.jewishvirtuallibrary.org/kremenchug].