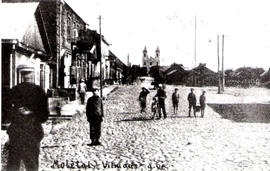 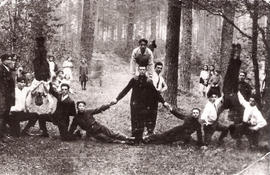 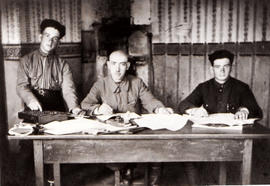 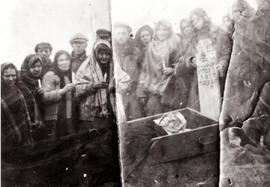 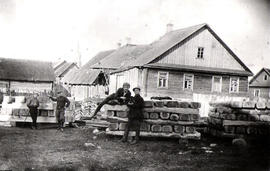 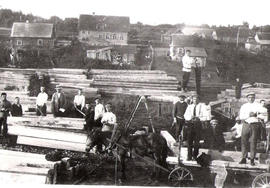 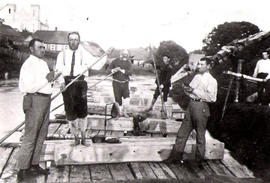 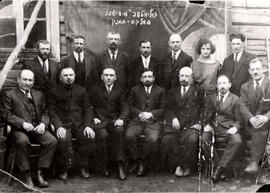 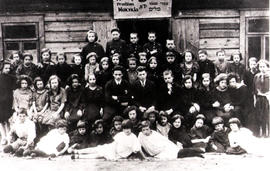 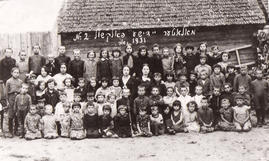 The Molėtai (English spelling: Moletai) Photograph Series includes 13 photographs, with a photograph of a street in the town, some young Jews in the forest, Jewish men at the timber works office, mourners at a Jewish funeral, a few photographs of men outside the sawmill, some men near a river, a group photograph of some members of the Yiddish folk bank, and class photographs of Jewish students. The Jewish students are either part of the Yiddish folk shul school, including the pre-primary and primary school children, or from the Tarbut school.

The chaotic pattern in Eastern Europe and nearby regions in the first half of the 20th century – mostly as a result of the two World Wars – consisted of sporadic occupation, independence, and reoccupation of territories. Following the same pattern as many shtetlach in Eastern Europe, particularly in Lithuania, Moletai was part of the Russian Empire until the First World War when it was occupied by Bolsheviks. The Russian declaration for all Jews to be driven out of their towns applied to Moletai, decreasing the population significantly, more so because Russians murdered many Jews on their way to Russia. In the interwar years, the town was part of the Independent Republic of Lithuania, with Jews contributing significantly to the economy via the Jewish Folksbank. However, the population of Jews decreased more since Jews left as economic conditions declined, mostly immigrating to Israel and South Africa. This independence was disrupted by Soviet invasion in 1940, and once again by Nazi invasion in 1941 at the start of the Second World War when Soviets and Nazis declared war. Germans and Lithuanians treated Jews with various kinds of cruelty and hatred, with some Jews being killed upon immediate arrival of Nazi troops, and others being forced to gather and wait without food and water to be killed three days later. [Source: https://www.jewishgen.org/yizkor/lithuania6/lit6_166.html].

The town of Molėtai (English spelling: Moletai) is named as such in Lithuanian, as Maliaty in Russian, as Malaty in Polish, and as Maliat in Yiddish.