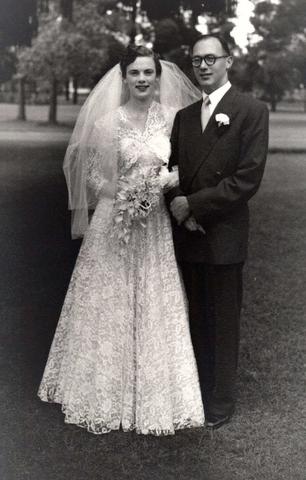 Wedding photograph of Ian (Isaac) Opeskin (1924-1989) and Lynette Valerie Bader. Ian was the son of Boris Opeskin and Rachel Keile Opeskin (nee Fleish) and was born in Plusy, district of Braslaw, province of Wilno, Poland (Plyussy, Belarus). Lynette Valerie Bader was the daughter of Leonard Isidore Landau and Mabel Bader (formerly Landau nee Morris).Her father died prior to her birth. The Opeskins were married on the 12th December 1954 in Johannesburg. They both qualified as doctors - he was a cardiothoracic surgeon and she was a pathologist. They emigrated to Australia in 1964.