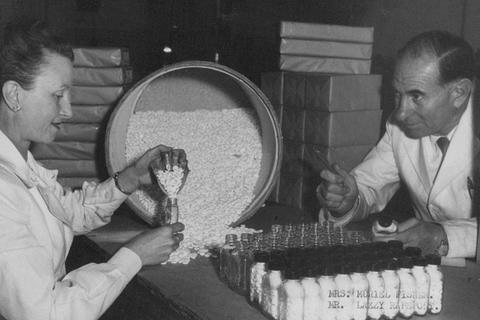 Photograph of Lazarus Rapeport (1903-1961). He was the third son of Louis Rapeport and Louisa Rapeport (formerly Ettin nee Kantor). He was known as Lazzy or Dummy as he was born "deaf and dumb". He was a raconteur and entertained people with his imitations of the political figures of that time. This photograph was taken at Pretoria Wholesale Druggists (Pty) Ltd. The sons of his sister Rose Goldstein (nee Ettin), Maurice and Samuel Goldstein, were directors of the company.