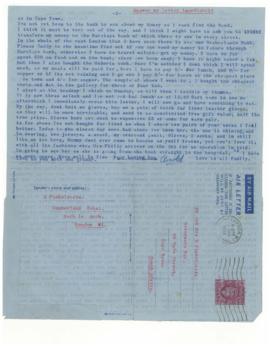 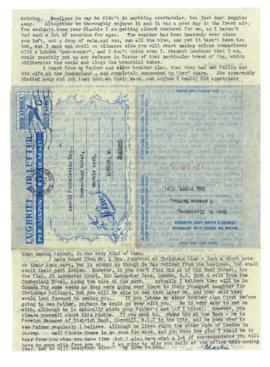 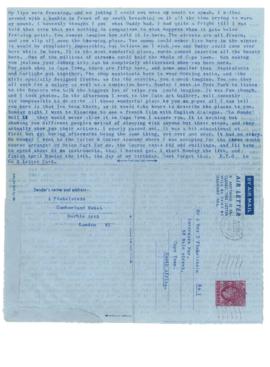 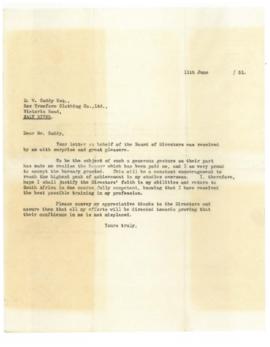 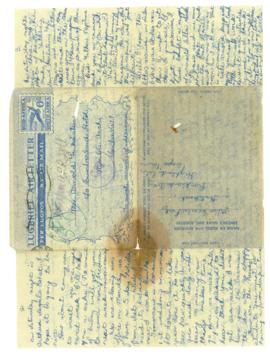 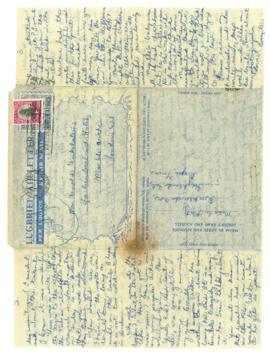 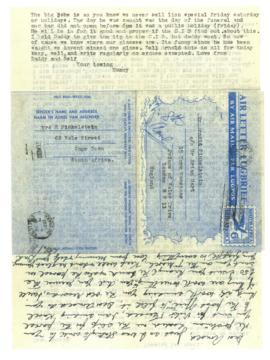 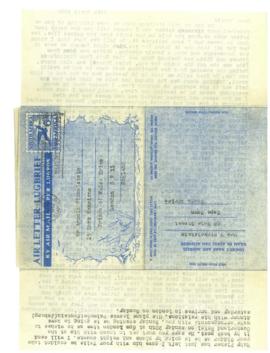 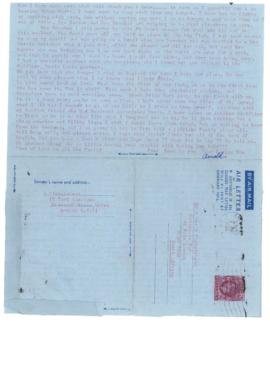 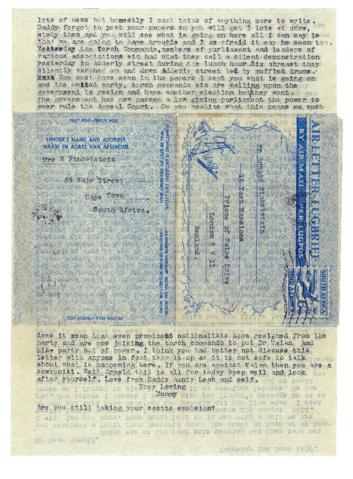 Arnold Finkelstein is known for being a prolific fashion designer in the 1950s and 1960s. During his bursary in London he wrote many letters to his parents. There are also letters to and from close family friends. Mr Finkelstein begins his letters to his parents by sharing “wonderful news”. He met with Mr Brian Hart of the London fashion industry and was to be staying with Mr Hart and his wife. This news was received very positively by folks back home, and Arnold’s mother immediately thought to ask, “Is Brian Hart Jewish?” Arnold did not yet know the answer but was thrilled nonetheless to be boarding with such an esteemed member of the industry.

Arnold was told by his college principal the course he had taken was very difficult and he would have to work like a bomb. Arnold Finkelstein made a prolific success of his career in Cape Town, and one can only deduce he must have worked hard and successfully during his time in London.
Speaking of bombs, Arnold shared with his parents the Great Synagogue Orthodox of London was bombed during World War Two in the Blitz, and the community would not rebuild it. Arnold also travelled briefly to Paris, France, as well as Copenhagen, Denmark and Goteborg, Sweden. During his time in Copenhagen he experienced anti-Semitism and felt miserable, and so quickly made his way back to London. As a result he almost cancelled his trip to Sweden, but ended up going, due to the demands of his father, and in fact had a wonderful time there.

Many of the letters of correspondence with Arnold’s parents share news of Arnold’s ailing health in London. He repeatedly writes of visits to the doctor, or taking new medication. Other letters relate to money being sent by his parents, or dealings with the bank. Arnold’s parents sent parcels of food as gifts to the Hart family for hosting Arnold, and they were thanked tremendously in more letters from Brian Hart’s wife to the Finkelstein family.

Some of the letters are written between Arnold and his friends in Cape Town. These friends were also in the fashion industry, or they were close acquaintances of the Finkelstein family. These letters also speak of poor health both in London and in Cape Town. Some of the letters share news of relationships and weddings happening in Cape Town, but Arnold does not reveal any news about his relationships in London, other than he had a terrible time one night at a lowdown night club. There is also mention of a girl who Arnold had dinner with one night, and who insisted on paying for herself, although it seems Arnold saw more of her on Television Ballet than a continued relationship. Arnold’s acquaintance Ronnie introduced Arnold to several high profile English actors such as Richard Attenborough, George Formby and Walter Fitzgerald.

Whenever possible research has been conducted to enrich these collections. If you have anything to add please contact us.