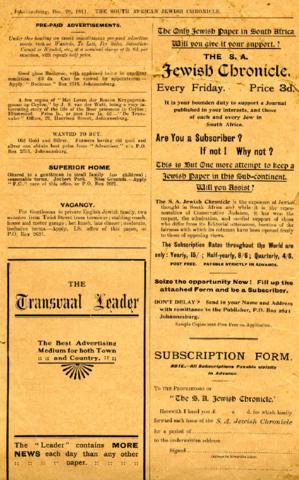 The South African Jewish Chronicle clippings, "Page 1 of the pre-paid advertisments on Page 1077"

Newspaper clipping depicting page 1 of the pre-paid advertisments on page 1077 in Volume IV - Issue 65 of the New Series in The SAJC newspaper circulated on 29 December 1911. This is the sixteenth page in the Collection of 20 consecutive pages preserved from an early Issue of the SAJC.
The pre-paid advertisments section is described in the SAJC as "miscellaneous pre-paid advertisments such as Wanteds, To Lets, For Sales, Situation-Vacant or Wanted, etc." and the cost is listed.
This particular page of advertisments includes some of these miscellaneous items, but notably includes a large advertisment for subscription to the SAJC. This advertisment tries to draw subscribers by stating that it is "the only Jewish paper in South Africa", and even going as far as to warn readers that it is their "bounden duty to support a Journal published in [their] interests, and those of each and every Jew in South Africa". This is a tactical argument to appeal to the communal identity of Jews, but is rather presumptuous to assume that every Jew in South Africa ascribes to these views. The SAJC advertisment in self-promotion goes on to acknowledge its Conservative nature, but claims that it has "won the respect, the admiration, and cordial support of those who differ from its Editorial utterances, because of the fairness with which its columns have been opened freely to those of opposing views". This statement begins by stating an exclusive fact, but then making an inclusive correction to that, based on a contradictory proclamation of openness despite being self-proclaimed Conservative. The openness may be in reference to the occassional opinion piece scattered throughout the SAJC, but the persausive language and potential for contadictory understandings is noteworthy. The page ends with a form to return to the Publisher if the reader wishes to subscribe.