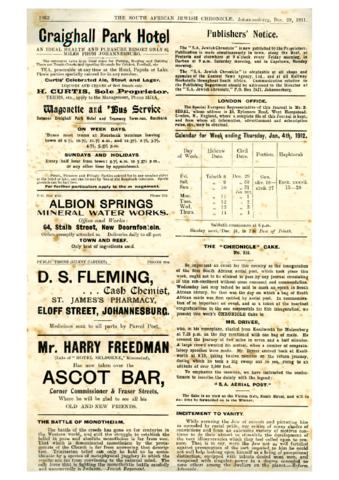 Newspaper clipping depicting page 1062 in Volume IV - Issue 65 of the New Series in The SAJC newspaper circulated on 29 December, 1911. This is the first page in the Collection of 20 consecutive pages preserved from an early Issue of the SAJC. This page contains mostly administrative information and is the cover page.

There is a Publishers' Notice in the top right corner, quite certainly a first-page occurrence. This Notice details the publisher of the SAJC (the Proprietors), and the publication day and time in the large cities of South Africa. This includes 9am on Friday in the town of Johannesburg, the Reef, Pretoria, and "elsewhere"; 9am on Saturday in Durban; and at 9am on Monday in Cape Town. This order of publication makes sense given the increasing distance from the publication house that was situated in Johannesburg. This notice also indicates that this newspaper was widely circulated at all major distributors and agencies, and at all railway stations, suggesting wide readership.
Below the Publishers' Notice, there is information about the London Office, reinforcing that this newspaper is an offshoot of the London Jewish Chronicle.

A practice unique to Jewish culture and religiosity is the presence of a particular kind of calendar in a weekly newspaper such as this one. The upcoming week is catalogued in a table consisting of a column titled from left to right as: Day of the week, Hebrew date, Civil date, Portion, and Haphtorah. We also see that Sabbath is declared to commence at 6pm, which provides a standard time across South African Jews to observe the Sabbath. If each column were unpacked in turn, we would find that the self-explanatory date remains constant regardless of the other columns. The Hebrew versus Civil date is an interesting indicator of Jewishness in this newspaper, where the Civil date refers to the Gregorian calendar date. In contrast, but in sync with, the Hebrew date refers to the Jewish calendar date, determined by a lunisolar system that relies on cycles of the moon and sun to determine day, month and year at any particular time. These dates determined by the Hebrew calendar are kept track of for religious observances, holidays, celebrations, and coming-of-age decisions (e.g. Bar- or Bat-mitzvahs). The month of this particular extract is called Tebeth. This kind of Hebrew calendar is distributed in the newspaper for cultural Jews as much as for religious Jews, since it details both when to celebrate a festive holiday and when to read what extract from the scripture. This refers to the next column, the Portion column details what part of the Torah is prescribed to be read for that week. Jews traditionally read the entire Torah throughout the year, which usually takes place on the Sabbath aloud in Shul services, but can also be a private affair. The calendar in the newspaper, nowadays transmit online or at synagogue, directs readers who are following this religious practice what they should read in the upcoming week. In the week depicted here, the reading comes from Genesis. The final column, Haphtorah, translating directly to mean "taking leave", refers to the section from a selection of scriptire from the books of Nevi'im (Prophets) in the Tanakh (Hebrew Bible) that is read on each weekly Sabbath and on Jewish festivals or holy days. With the note that the 31st of December 1911 aligns with the Fast of the Tebeth (Tebeth 10th) – a Jewish observation of the tenth day of the tenth month in the Hebrew calendar – this particular week requires a Haphtorah column, since there is a fast/holy day to observe. In the week depicted here, the Haphtorah reading comes from Ezekiel.

'The Chronicle Cake' Award feature in this newspaper is noted on this page, which refers to an award for a person or organisation who has warranted celebration, named and celebrated in the SAJC Issue of that week. A literal cake is made, and is even noted to be on display at a confectioner, with the inscription of the event/person being awarded. In this case, the SAJC is celebrating and awarding Mr Driver for being the pilot of the first South African aerial post plane, marking a historical milestone for post delivery. The column for this award describes the event in more detail, and explains why it is worthy of the 'Chronicle Cake Award'. This suggests a strong community attitude, which is characteristic of Jewishness.

Other adminstrative details on this page include a bus timetable, an advertisment for a resort not far out of the Johannesburg region, and an announcement of new ownership of the Ascot Bar.

The last two pieces on this front page are the beginning of the articles section of the newspaper, with two opinion pieces: "The Battle of Monotheism" and "Incitement to Vanity". The first article is a Jewish pride piece in favour of Judaism about other religion's failed attempts – particularly Christianity – to convince polytheists of monotheisms. This article argues that the trinity of Christianity is a particular failure in advocating for monotheism, since this anonymous writer ("Jewish Exponent") cites the holy trinity as a contradictory argument for monotheism, leaving Judaism as the only 'true' force for monotheism. The second article is an opinion piece by an anonymous writer who is cited as "Reform Advocate", written about how stereotypical and prejudiced assumptions about Jewish folk as conceited and guilty of 'racial pride' encourages these stereotypes into truth, since being persecuted in such ways by others only leads to the belief that they are worthy of such pride for enduring and overcoming this.