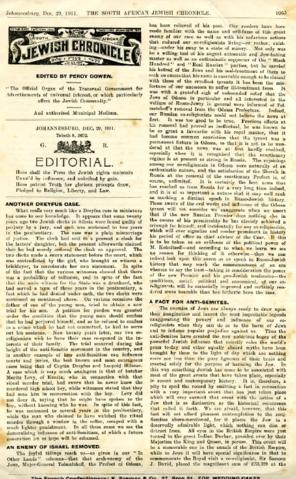 Newspaper clipping depicting page 1063 in Volume IV - Issue 65 of the New Series in The SAJC newspaper circulated on 29 December, 1911. This is the second page in the Collection of 20 consecutive pages preserved from an early Issue of the SAJC.
This page includes the official header of the Jewish Chronicle, with Hebrew writing around the heading/title, and official information regarding the Editor's name (Percy Cowen), description of the newspaper, and the date in both Gregorian and Hebrew terms.

The Editorial is also included here as a motto formatted as a short poem: "Here shall the Press the Jewish rights maintain / Unaw'd by influence, and unbribed by gain. / Here patriot Truth her glorius percepts draw, / Pledged to Religion, Liberty, and Law." This provides insight into what is valued by this newspaper's editorial team, where they claim an unbiased and non-profit driven agenda, aiming to deliver truth and news aligned with Jewish values including Jewish religion, liberty and law.

Of the three articles on this page, the first is titled "Another Dreyfus Case". The title refers to the Dreyfus Affair whereby the Jewish-French artillery officer Alfred Dreyfus was wrongly accused and imprisoned for treason, understood to have occurred on grounds of Anti-Semitic intent rather than based on evidence. [Source: http://law2.umkc.edu/faculty/projects/ftrials/dreyfuslinks.html]. The current article describes a similarly unjust imprisonment of two Jewish clerks in Silesia (then a Polish province) for perjury, with detail of roleplayers and witnesses in this case. The conclusion drawn is that Anti-Semitism is rife and unaccounted for, still then, despite hopes and promises of amelioration. The theme here is bringing the reader's attention to Anti-Semitism.

The second article is titled "An Enemy of Israel Removed". This suggests a Jewish nationalist theme in this article, as enemies of Israel can be understood as those who are not in agreement regarding the establishment of the State of Israel, at this time not yet formed. The newspaper article describes a triumph for Jews all over the world, following the dismissal of an Anti-Semitic Major-General in Odessa, a province of the Russian Empire. This Major-General Tolmatcheff has been documented in other sources as enacting various orders and proclamations that limited the rights and freedoms of Jewish folk in Odessa, including restrictions on Jewish religious practice, and unfair taxing of Jews to pay for oppressive policies against their own people. The article celebrates the trimph of this Major-General being dismissed, with conclusions that are optimistic about the future for Jewish folk in this region. This was unfortunately false hope, as Jews were only treated with increasing hostility in Russia and Eastern Europe following 1911. [Source: https://www.jstor.org/stable/23600634]. This article shows the global reach of overseas triumphs in expected improvements for Jewish folk, indicating a global community awareness among Jews.

The third article, titled "A Fact for Anti-Semites", is the first page of an article that summarizes some of the conspiracies that are ciruclating about Jewish world domination plans. The article's aim is to highlight an event of particular generosity of a Jew in a donation to the British Empire and the Indian Government, which was done in the hopes of improving the lives of those in this colony. Sharing this information is done so in order to show the lack of truth value in the Anti-Semitic assumptions and prejudices, providing a reinterpretation recommendation for Anti-Semites, with this event in mind. There is also a clear nod to the Anglicized nature of the newspaper, since a charity in one of the British colonies is chosen to represent this idea. It is additionally interesting to note that this article is addressed to Anti-Semites, although the newspaper is intended for a Jewish readership.