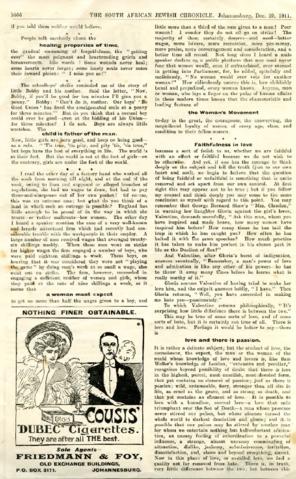 Newspaper clipping depicting page 1066 in Volume IV - Issue 65 of the New Series in The SAJC newspaper circulated on 29 December, 1911. This is the fifth page in the Collection of 20 consecutive pages preserved from an early Issue of the SAJC.
This page of the Issue is the second of almost three pages dedicated to the "Social and Fashionable" section. Here, the "Social Editress" shares what is considered noteworthy social occurrences such as weddings/engagements, etc., the latest fashions and subjects related to marriage and womanhood (according to the description, suggesting conservative gendered assumptions). Among the letter-like writing of this section, this page also includes an advertisment for cigarettes. More noteworthy is a particular portion which discusses the hardship of being a working woman, women (rightfully) demanding equal pay, and taking part in the women's movement. These issues stand pertinent today, with additional complexities of intersectionality. As early as 1911, in a newspaper aimed at Jewish readership, we see women acknowledging discontent with the status quo.