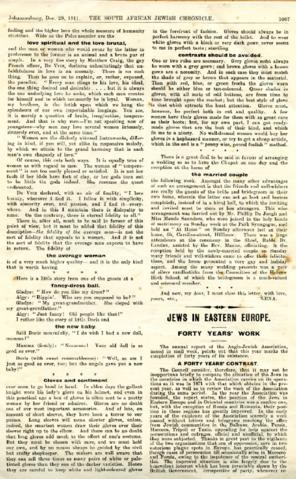 Newspaper clipping depicting page 1067 in Volume IV - Issue 65 of the New Series in The SAJC newspaper circulated on 29 December, 1911. This is the sixth page in the collection of 20 consecutive pages preserved from an early issue of the SAJC.
This page of the Issue is the last of almost three pages dedicated to the "Social and Fashionable" section. Here, the "Social Editress" shares what is considered noteworthy social occurrences such as weddings/engagements, etc., the latest fashions and subjects related to marriage and womanhood (according to the description, suggesting conservative gendered assumptions). This section ends with a declaration of love from the "Social Editress" named Lena.

Following the Social section of the newspaper, there is a section dedicated to the Jewish Diaspora. With this Issue of the newspaper being the final one of the year, this section is a Special Issue as it summarizes the work of the Anglo-Jewish Association, which reports on the position of Jews throughout the diaspora, particular in Eastern Europe and the "Oriental countries". This is specifically a forty year celebration since the beginning of the Association, which is being praised for vigilance and raising awareness, and for the "benevolent" British Government. The article claims that the scenario for Jews in the areas in question has greatly improved, with acknowledgement of Russia and Rumania as exceptions. The first subsection of this Diaspora Special Issue is titled "Jews in Eastern Europe", which begins at the bottom of this page and continues to the next page.