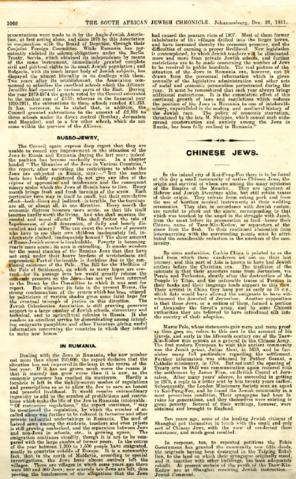 Newspaper clipping depicting page 1068 in Volume IV - Issue 65 of the New Series in The SAJC newspaper circulated on 29 December, 1911. This is the seventh page in the Collection of 20 consecutive pages preserved from an early Issue of the SAJC.
This page consists of a continuation of the Jewish Diaspora section of this Issue of the SAJC, with an article being continued at the top. With this Issue of the newspaper being the final one of the year, this section is a Special Issue as it summarizes the work of the Anglo-Jewish Association, which reports on the position of Jews throughout the diaspora, particularly in Eastern Europe and the "Oriental countries". This is specifically a forty year celebration since the beginning of the Association, which is being praised for vigilance and raising awareness, and for the "benevolent" British Government. The article claims that the scenario for Jews in the areas in question has greatly improved, with acknowledgement of Russia and Rumania as exceptions.

The first subsection of this Diaspora Special Issue is titled "Jews in Eastern Europe", which began on the previous page and continues here with subheadings for Russian Jewry and Rumanian Jewry. Unfortunately, the news in both these subsections of Eastern European Jewry is ominous and worsening. Each subsection emotively describes the situation of oppression and starvation, with a shrinking Jewish population and increasing hopelessness.

The following subheading of the Diaspora section refers to "Chinese Jews", and details what the scenario for Jewish people in China is. This begins with a description of the origins of this community, and how their customs and beliefs are different to Jews in most other countries, where the latter is considered the mainstream version of Jewishness as it incorporates Hebrew and Jewish literature. There is some news of rebuilding of previously destroyed synagogues, and rights/freedoms given to Chinese Jews, indicating progress in the treatment of Jews there.