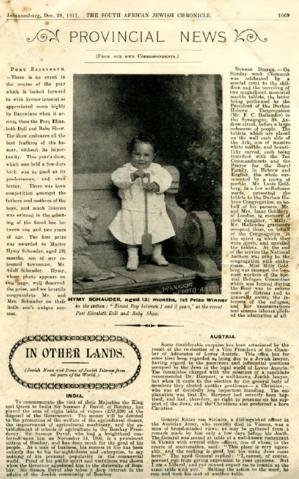 Newspaper clipping depicting page 1069 in Volume IV - Issue 65 of the New Series in The SAJC newspaper circulated on 29 December, 1911. This is the eighth page in the Collection of 20 consecutive pages preserved from an early Issue of the SAJC.
This page consists of a continuation of the Jewish Diaspora section of this Issue of the SAJC. With this Issue of the newspaper being the final one of the year, this section is a Special Issue as it summarizes the work of the Anglo-Jewish Association, which reports on the position of Jews throughout the diaspora. This is specifically a forty year celebration since the beginning of the Association, which is being praised for vigilance and raising awareness, and for the "benevolent" British Government. The article claims that the scenario for Jews in the areas in question has greatly improved, with acknowledgement of Russia and Rumania as exceptions.

This page begins with "Provincial News", referring to news of Jewish folk within South Africa in two other major cities of the country: Port Elizabeth and Durban. The Port Elizabeth report provides the name of the winner of a beauty paegant of sorts for "the finenst boy between one and two years of age", named Hymy Schauder. The Durban report details the unveiling of some memorial tablets by the President of the Durban Hebrew Congregation (Mr F. C. Hollander).

The Diaspora Special Edition section continues with a miscellaneous subheading for Jews "In Other Lands". Two countries included here are India and Austria. Both reports for these two countries speak of influencial Jewish people, or people who were sympathetic or who advocated for Jewishness when faced with adversity/anti-Semitism.