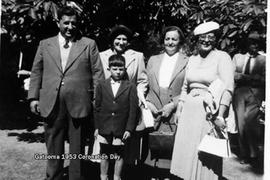 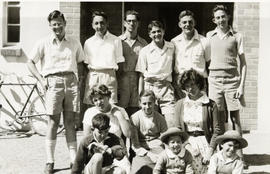 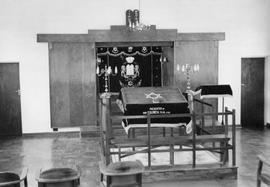 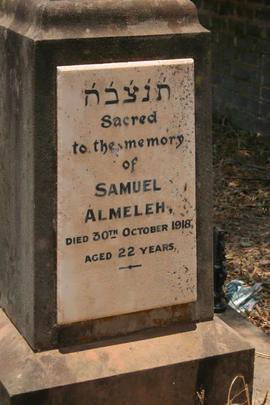 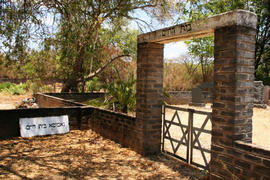 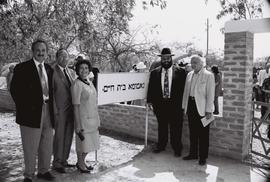 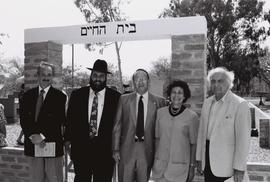 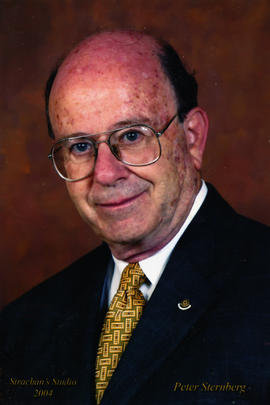 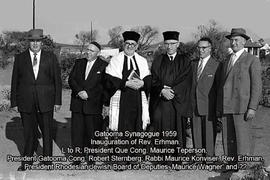 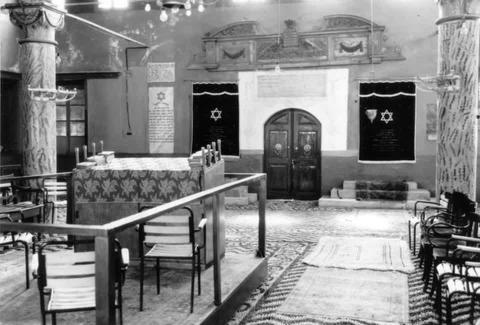 Jewish friends pose together for a social snap whilst attending the celebrations of the Coronation for Queen Elizabeth in Gatooma in July 1953.
The teenagers of the Gatooma Habonim in 1953 pose in front of the Gatooma Synagogue under construction. The synagogue was consecrated in 1953 and was the communal centre for about sixty Jews in Gatooma, a small mining and agricultural town 140km west of Salisbury (Harare).

Robert Sternberg founded the Gatooma Hebrew Congregation. He fled Nazi Germany and arrived in Rhodesia (Zimbabwe) in 1939. He conducted the High Holidays services at various venues. With the establishment of the Federation of Rhodesia and Nyasaland the economy boomed and so did the Jewish population. At its peak there were 7000 Jews living in Rhodesia.

The Gatooma Hebrew Congregation flourished for a while until congregants chose to move to the larger centres of Salisbury. By the 1980s with hardly any congregants the synagogue was sold to a church group who later demolished it.

An image in the collection captures the interior of the synagogue. The building served as both a synagogue and a communal hall. By drawing the large wooden panels in front of the arc it became a hall.

Gatooma began its existence as a mining town in 1906. In the Jewish cemetery is the earliest grave. In 1998 with funds from overseas Peter Sternberg had the Gatooma Jewish Cemetery refurbished. Leaning graves were rectified. A new coat of paint was put on the letters on tombstones and a small plaque was put on unmarked graves. A low wall was erected.

In 1998 the reconsecration of the Gatooma (Kadoma) Jewish Cemetery was well attended by Jews from the Harare Jewish Community. A photograph taken by Benny Leon at the event shows President of the Sephardi Hebrew Congregation Philip Hasson, Peter and Hermoine Sternberg, Rabbi Moshe Silberhaft and President of the Harare Hebrew Congregation, Freddy Weisenbacher.
Other Jewish people and their histories are in the collection; including Peter Sternberg, Rev Ehrman, Samuel Hasson, and the Leon family.

This collection also features photographs from the Sephardic Hebrew Congregation of Rhodesia (Zimbabwe). The Congregation’s president Mr A. I. Menashe said at the Sh’are Shalom Synagogue, Rhodes Island, consecration on 1 June 1958, “We now have a permanent house of worship.” People had come from as far as London and New York to attend the service. The distinguished gathering also included the Governor-General Lord Dalhousie and the Governor of Southern Rhodesia Sir Percival William-Powlett.

The Sephardic Hebrew Congregation had begun 25 years earlier in the then Rhodesia. Services had been held, of necessity, in a number of places. A photograph of the interior of a temporary synagogue is also available in the collection.
The new synagogue was declared a symbol of thanksgiving to the God of Israel for bringing his children to the land. The Very Reverend the Haham, Rabbi Dr. S. Gaon said that many members of the congregation had been given the opportunity to build a new future for themselves and their children in Rhodesia.

The sacred Scroll of the Law from the Mother Congregation was carried around the synagogue by clergy and wardens at the start of the service. The Scrolls were then placed in the Sanctuary which was opened by the Rabbi Emeritus, Mr. B. D. Almelah. Rabbi Dr. M. Papo consecrated the Perpetual Light. The consecration stone was unveiled by Mr. B. S. Leon.